Samsung Galaxy A20 is another contender in the budget smartphones. Though it might be cheaper than the flagship models, it still brings a few premium functions that are long wished. These include a high-quality display, face recognition, and fast charging.

Where to buy Samsung Galaxy A20

Samsung has brought yet another A series phone on the market, this time calling it Samsung Galaxy A20. The Samsung Galaxy A20 design doesn’t alter a lot from most smartphones on the market, but it does have a sleek overall look with minimal design maximizing the display. It has a fingerprint sensor on the middle of the back side for easy reach while you’re holding it in your hand, the double camera on the left top corner with a flash and the power with the volume buttons on the side. The bottom of the phone you find a USB-C for charging with a 5.1 headphone jack connector for your headphones.

The Samsung Galaxy A20 is very comfortable in your hand with its rounded corners and sides, making it easy to hold even for longer period of times. We had no trouble viewing movies or playing with the phone for an extended period of time since it felt very comfortable in our palms and didn’t really start to dig in as the Razer Phone 2 has a tendency to do. Though the slippery polycarbonate back might make it slip out of your hand if you have wet hands. For protection, we recommend getting a case that fits the Samsung Galaxy A20 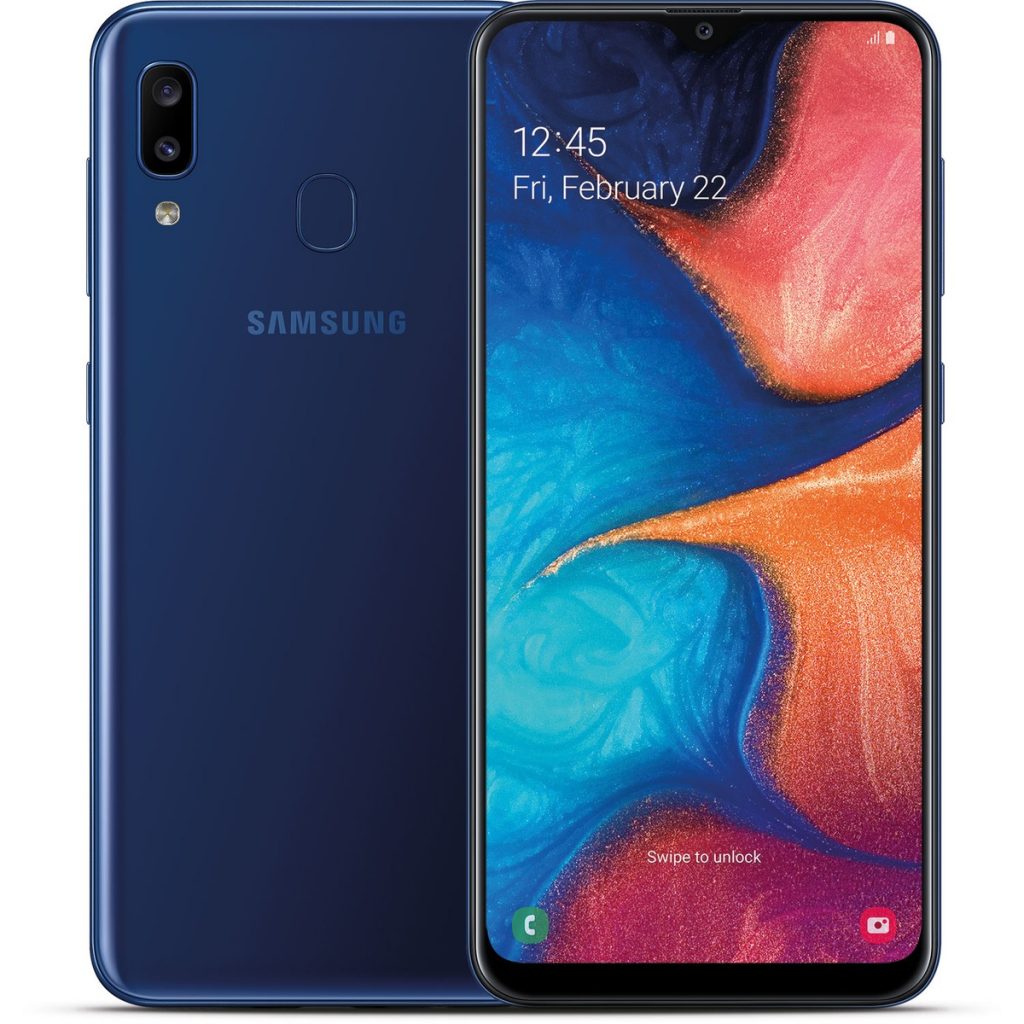 Even though the Samsung Galaxy A20 is a budget phone from Samsung, it doesn’t mean they haven’t put effort into it. The Samsung Galaxy A20 is equipped with a 6.4-inch super AMOLED display. Though we do want to note that the display only has HD+ resolution, but it’s still better than what you usually find in your budget smartphones. There is a small V-cut on the top middle of the display where the front camera is placed so if you’ don’t like the notch, this might be a deal-breaker for you, though personally, it didn’t really bother us at all. With a trained eye, you might see some fuzziness on the edges of the text while viewing the display, but the display still offers superb contrast and close to neutral whites and the option to choose between four color presets. It might not be the best display seen on a smartphone, but more than capable to offer enjoyable viewing moments if you’re into watching YouTube, Netflix, or Prime movies from your phone.

Samsung Galaxy A20 is equipped with a 4000 mAh battery giving it enough power to run for a full day. Samsung has also thrown in their fast charging giving the phone even more mileage for the day. The old Mini USB has also turned into a USB-C meaning you won’t need to worry anymore which way to plug it in.

The fast charging is usually reserved for the flagship phones so adding it in this price point really adds value for the phone. It charges the phone up to 35-percent in the first 30 minutes and takes less than two hours to fully charge it.

The Camera on the Samsung Galaxy A20 is really something. Considering the price point it really shows that Samsung has been putting years of effort in their smartphone cameras. The overall performance is solidly good and there is little to complain, considering the price and that the back camera is a 13 MP and is followed with a second 5 MP wide-angle shooter.

Inside and outside photos are well balanced and there is enough color on each picture. Some smartphones tend to add a bit too much color on their photos to make them look better, but it seems Samsung has managed to get the color just right in this one. Though you don’t get the same quality of photos as on the Samgun Galaxy S9 for example, it still offers a solid photo experience.

Some low light images might be a bit fuzzy, but thankfully Samsungs software knows how to fine-tune them to be a bit more usable.

The 8 MP front camera works as an OK selfie camera in good lighting, but anything else than that we wouldn’t recommend using it.

As mentioned earlier the Samsung Galaxy A20 is a budget phone, meaning it’s not as powerful as flagship model smartphones. It does, however, bring in an acceptable amount of power with its Exynos 7885 processor (though slower than the Exynos 7904 that M20, M30, and A30 are equipped with). The overall performance is snappy and the 3G of RAM is enough to run most basic apps you might use on the phone. Though there is no huge amount of lag or stuttering, we still wouldn’t recommend this smartphone for gaming.

3GB of RAM and 32 GB of native storage that can be upgraded with an additional microSD storage. Sounds reasonable for the price point and that’s what it really is. The RAM can be a bit of a bottleneck from time to time as well as the 32 GB of internal memory, but as always the phone is clearly made for a basic user, so we can’t expect too much from it. The upgradable storage is a nice plus, giving that much needed extra space for all your photos, apps, games, and videos.

Following the new trend, Samsung has equipped the Galaxy A20 with the Android One. The overall experience is much more fluid and the nifty animations, as well as the optimized UI, give it a sleek look and easy to use feel.

The fingerprint sensor and the face recognition that Samsung has added to this budget smartphone does work, but it does take a small amount of time for them to unlock the phone. Especially the face recognition has a hard time recognizing the person holding the phone in low lighting. This is something we would wish Samsung fixes in the future to make it feel more snappy.

The Samsung Galaxy A20 is a great budget smartphone for the casual user. It runs most apps without any problems and even brings a few flagship smartphone properties with it. These include face recognition and the AMOLED display, that is not usually seen in the budget smartphone category. It also has an excellent 4000 mAh battery that is equipped with the fast charging making sure you won’t run out of battery any time soon. Though the performance could be a bit better, as well as the camera, and the display resolution, we still think it’s a great choice for anyone looking for a good budget smartphone for casual use with some flagship smartphone properties.