The Amazon Fire TV stick is packed with new features and small improvements. Its packed with Amazons own voice command system Alexa and has a new improved user interface with tons of other features. The only question remains, can it really beat the other streaming devices on the market and how does it really feel when you get to use it.

The design of the Amazon Fire TV Stick is fairly simple. It mainly looks like a big USB drive that you just stick to your TV. Though this stick goes directly to your HDMI port. Thankfully it has more features packed into it than in your old phone that could only call and send text messages.

One thing to note is that it’s a bit bulky going at 9 cm long and 3cm deep. On top of that, you need some space for the Micro USB cable that powers the device. Thankfully Amazon has included an HDMI extender in the box so you should have enough room for everything behind your TV.

The remote continues the simplistic design of the stick. Its black has only a few buttons and on the top of it has maybe the most important feature, the microphone button that you can use to communicate with the Amazon Alexa that the Amazon Fire TV stick has. The remote has a D-pad for navigation on the middle and some media controls which work as intended.

Setting up the Amazon Fire TV Stick is easy. Plug it into your HDMI port, add the Micro USB cable for power and you’re ready to go. After you start the device just follow the on-screen instructions and you get your Alexa paired with your Fire TV Stick and connected to the home network. 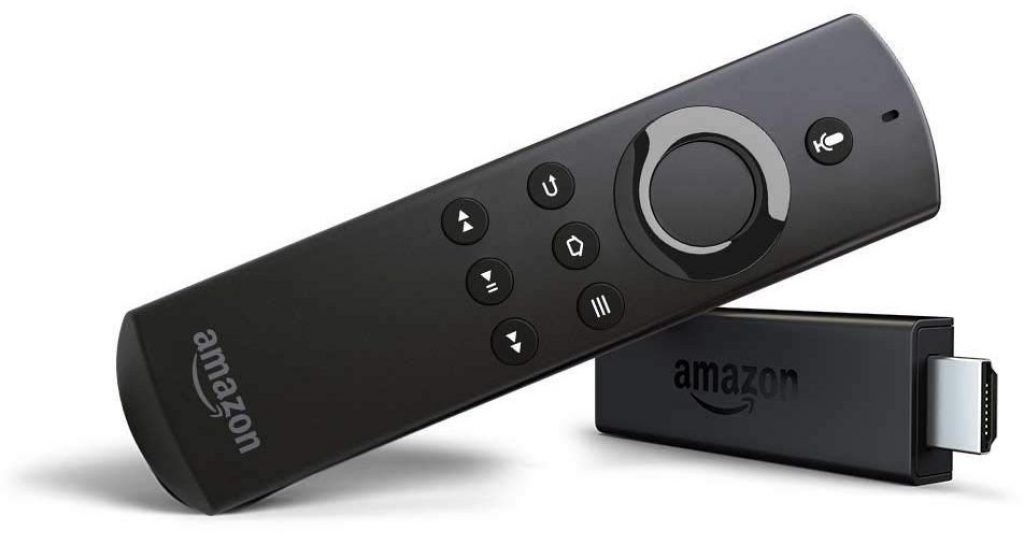 The interface on the Amazon Fire TV Stick has had some major updates from the old models. The interface is much more sleek, easier to navigate and the main navigation has been moved from the side to the top. There are also new features like big content recommending carousel.

The Amazon Fire TV Stick will now also learn about your viewing habits and can now recommend movies, series, and music better to you, which some might notice work almost identically to Netflix. The good thing about the Amazon Fire TV stick is thought that it doesn’t recommend just Amazons own series or content but can include Netflix, HBO, and other content as well, making the use more intuitive and useful.

We do have to mention that a lot of the content is focused on Amazon Prime users and we do recommend everyone to get it thanks to the great content and other things it provides. Thankfully though as we said earlier using other apps and finding other content is a breeze thanks to the way the system is built

There have been some upgrades on the Fire Stick features too. It now has a new quad-core processor and improved Wi-Fi. Amazon has also said that the chipset should promise to be 30% quicker, while the new Wi-Fi with 802.11ac promises faster and better quality streaming, download and faster buffering.

The stick packs 8GB of memory for apps and games and has 1GB RAM which means they are the same as on the predecessors.

The Amazon Fire TV stick works as its intended. There is little to no input lag while scrolling and using the features of the stick. Everything works smoothly and even Alexa works as its intended. As long as we have used it Alexa has almost never miss understood us. Alexa feels like a natural addition to the Fire TV Stick and makes using the service fun and easy.

Though there are some downsides. Alexa might understand what you ask, but unfortunately, not all the search results are what you’re looking for. Though on specific movie, music or series searches she works like a charm.

Another cool feature with the Fire TV stick and Alexa is that you can ask your daily questions from weather to sports and everything in between. Alexa also allows you to control other smart devices in your home which makes this little stick even better addition to your TV and gives so much more flexibility on using these devices.

People have been extremely happy with their Amazon Fire TV Stick and there seems to be almost nothing bad to say about this device.

The improvements to Amazon Fire TV Stick might be small, but important. Everything works as designed and there is almost nothing bad to say about this device except that it might focus on Amazon Prime users a bit too much, but this is easy to forget thanks to all the features packed into it.

8.9Expert Score
Amazon Fire TV Stick brings Alexa voice commands to your TV. It makes using the TV more fun and simpler with an easy to use interface to access all the Amazon Prime shows and movies you want. Though this is a good thing it also means you are forced to be a Primer member to get most out of the stick.
Price
9.5
Features
8.5
Easy to use
9.5
Voice commands
8
PROS
CONS